Nowadays, we can see increasing occasions where robotic devises are playing roles in nursing care, for example, for helping to move from a bed into a wheelchair, as a monitoring sensor and a communication tool. What preparation is required to actually introduce robotic devises for the use in the areas of nursing care? What effects are being produced in fact in those areas of nursing care where robot care devices have been introduced? To answer these questions, we will describe on this page (or in this text) the current status of implementation of robotic equipment in nursing care and will provide information on the preparation necessary toward the introduction of such device as well as case examples and their effects.

There are many people who expect that “their care works would become easier with a robot” when they are introducing a robotic care device. However, “Just introducing robotic care devices from a simple viewpoint of making care tasks easier for care givers is not enough to continuously utilize robotic devices,” according to Mr. Shinji Funada of the Japan Association of Certified Care Workers. 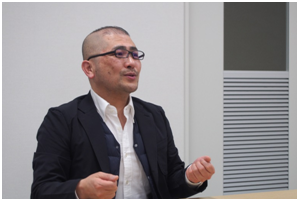 At our facility, training on ICF (International Classification of Functioning, Disability and Health) is always conducted before introducing a robot care device. They create a care plan from a viewpoint that “what should be done for a care receiver to be him/herself in daily life” and they use robots as part of the support for realizing the care plan.

For example, a woman came to the health facility who seemed to have lost her will to live and ate almost nothing because she felt guilty about her eating. After talking with her family, it was found that she used to love taking care of others, so they decided to create a care plan for her on the assumption that she was hesitating to receive care from other persons.

Before that time, she was always assisted with rising, changing her clothes and moving into a wheelchair. Then they began using a robot for calling to her to wake up in the morning and allowing time for her to move in her own pace with the robot sometimes talking to her. In this way, she has become able to rise on her own. Before, the woman was hesitant when being talked to by a care person and was not able to take her time to rise. They can avoid risk by setting up a sensor that detects movements of the woman when rising in the morning and gives an alert to care staff of any abnormal event. Furthermore, she can not only rise alone now but also put on a jacket on the bedside for herself as shown on the video that was detected and recorded by the sensor. Thereafter, they let her do changing her clothes in her own pace. One month later, she became able to rise in the morning, change her clothes and move into a wheelchair all by herself. And she also became capable of folding the laundry in a smooth way which she used to be good at. In this way, she has regained her vitality to live, according to them at the facility. 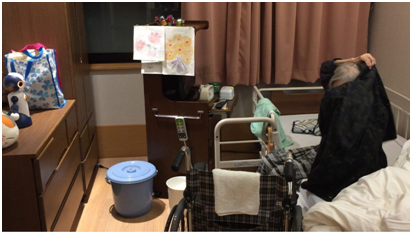 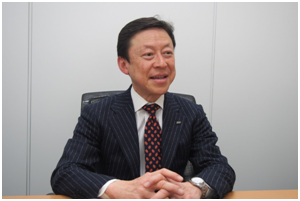 ORIX Living, a firm operating nursing care facilities across Japan, has developed jointly with a sensor manufacturer the system that detects movements of residents in the facility using a sensor to help prevent them from falling down. By recording the location of a bed, the system can detect movements of the resident and if any unusual or dangerous movement was detected, it sends an alert to a caregiver’s tablet or smartphone terminal. Caregivers can monitor behaviors of the residents from privacy-protected images.
By introducing this system, the company has succeeded in reducing by half the fall down rate in their facilities. Yoshiaki Morikawa President of ORIX Living says, however, “right after the introduction of the system, it issued an alert many times a day.” He emphasizes that not only introducing the system, but it is also necessary to review to determine on what plan should be established and on how to use it accordingly. 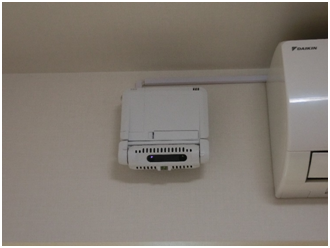 ＜Monitoring sensor installed on the wall in a resident’s room＞

Benefits that can be obtained from introducing robotic care equipment such as those explained partially with the case examples in the previous section are outlined as follows:

With some robots and sensors, you can acquire data about care receivers. Analyzing acquired data such that at what time a care receiver woke up in the morning and in what occasions there were high risks would be helpful to create a care plan that is suitable and sensible for the individual. It is also possible to share information with several persons.

Shifting from care depending on personal skills to standardized care

In some cases, the method of care depending on personal skills can be standardized through introduction of robots. For example, ORIX Living has introduced a transfer lift in its all facilities. Before the introduction of the device, the company provided the care staff with a lecture to study why a transfer lift is necessary and how to use it. As a result of the lecture, transfer process in the facilities has been standardized and it also helped to alleviate the back pain of caregivers and the care staff were enabled to focus their efforts on other services. 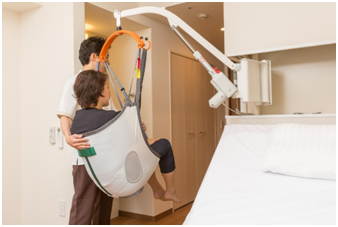 Another benefit of using a robot is that care receivers are not hesitant to behave as they like. Caregivers tend to extend a helping hand soon instead of waiting and letting a care receiver to do things in his/her pace. And then care receivers give up to do things him/herself and leave it all to the caregiver. A robot promotes the independence of care receivers and it leads to widening the range of things that “a person can do on his/her own.” 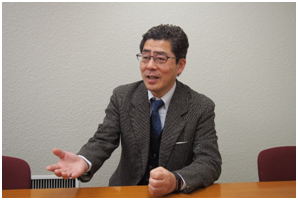 We have explained about utilization of robots in nursing care facilities above. It’s expected that the number of robots will also increase that will be used for in-home nursing care. “Monitoring robots” and “sensors” are considered relatively easy to introduce as a robotic device for the use of nursing care in private homes. Mr. Morikawa, president of ORIX living says, “Care should be provided to enhance the quality of life for care receivers. To do this, it is necessary to understand and obtain information about the style of living of those persons who need care.” Many kinds of sensor for safety confirmation or monitoring are available in the market, including inexpensive ones.

In the case of in-home care, care receivers have to move themselves in various scenes, and a walk assist robot is considered to be helpful for them in the opinion of Professor Yukio Honda of Osaka Institute of Technology. Professor Honda also says, “The market of robotic care equipment is still small in size and the key to the expansion of the market is how effectively robot care devices will be introduced in nursing care at private homes.”

There are increasing number of products of toilet sensors, according to Mr. Funada. He hopes that “this type of sensor will be widely used because there are a lot of care receivers who don’t like to receive toilet care from other persons.”

Toward dissemination of robots in wider areas of nursing care

There are many types of robotic care devices that have been developed and proven in recent years. Still, it is a long way to go until robotic care equipment is disseminated in the society. To achieve this, they say that people working on site of nursing care need to change. Mr. Funada emphasizes, “There are people who still believe in the stereotype that the best way to provide care is doing so by persons. However, lesser care needed is desirable and we should provide care receivers with appropriate care so as to increase the things that they can do on their own.” President Morikawa of ORIX living also says, “Only introducing robots is not enough to utilize them effectively. Robots must be introduced as part of the whole process of improvements of current care works and establishment of ICT systems. And it is important to recognize that robot care devices are necessary for the sake of care receivers, not for caregivers.”
Education of care workers is also important. ORIX living, for example, provided its care staff with a lecture before introducing a transfer lift to fully explain about the necessity and how to use the device. As a result, the introduction process of the device was smoothly completed. Similarly, provision of proper education is believed to be effective for implementing smooth introduction of robotic care equipment. Professor Honda also points out that if a system of qualification or a Meister scheme is established in relation to robotic care devices, the dissemination of care robots would be driven at a faster pace.
Publishing on-site information from the field of using robotic devices is effective, too. Various case studies that demonstrate the use of robots have been published. In addition to that, summarization of voices from users, exchanges through SNS, etc. and other types of communications would be expected to work as a drive for creating a tide of introduction of robots. According to Professor Honda, it is necessary to avoid drawing a line between the nursing care and daily life. He continues, “Robotic care devices should not be developed only for the purpose of care. It is desirable that robots being used in daily life are also used for the purpose of nursing care, which will lead to an increase of scenes and people using robots and the expansion of the market. In this way, robots will become much more familiar to all of us.”

For those who want to know more about robotic care devices